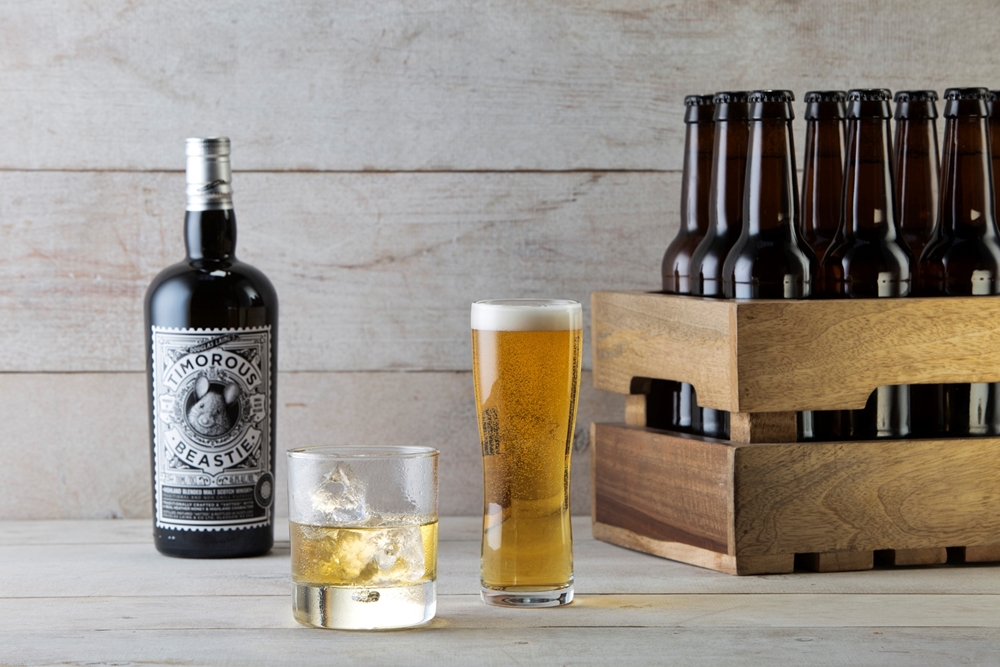 When it comes to whisky and beer, the mind is likely to conjure up the image of sipping either as the recreational conclusion to a hard-working day. Beer is cooling, refreshing and quenches a thirst, whereas whisky is warming and a drink that begs to be savoured.

With two drinks that contrast so starkly, could pairing beer with whisky produce something downright delicious? Or is it a recipe for disaster?

Despite the final product being so different, whisky and beer have one surprising factor in common: the ingredients used to make both are fundamentally the same.

To create whisky or beer, water, grain and yeast are needed. The process to make both are initially identical too – they both begin their life cycle with malting and mashing. The next stage – fermentation – is where the differentiation is made.

At the stage of fermentation, whisky-making relies on the chemical process of adding the yeast in order to convert the sugars in the mix present into alcohol. The resulting solution is then distilled and matured for a minimum of three years.

Beer is made by adding hops before the yeast during the fermentation process to flavour the alcohol and add “bitterness”. After this, the alcohol is bottled and artificially or “naturally” carbonated. The bottled beer may then be left to “age” for between a few weeks to a few months.

Unlike beer with its added hops, the flavour of the whisky is largely derived as the result of external factors: the casks the alcohol is matured in, the location of said casks, the quality of the water source and so on.

This said, although the process for making whisky and beer deviates during the fermentation process, it is not unusual from time to time to come across a beer or ale that tastes of whisky, making the relationship between the two more tangible.

PAIRING BEER WITH WHISKY – THE “HALF N’ HALF”

Combining both beer and whisky to make a “cocktail” of sorts is not an unusual concoction –people have been serving up a “Half n’ Half” – that is a dram served with a half pint of lager, ale or stout - for decades. In fact, historically this particular pairing has enjoyed popularity under a number of aliases, including the “Boilermaker” – a term that can be attributed all the way back to the 1920’s.

The “Half n’ Half” has long been a popular combination amongst a more traditional, mature market – but with the rise of craft beer, it is expected that a younger, perhaps new-to-whisky audience will be enticed to adopt the pairing and revive the old classic as a commonplace drink in bars and pubs around the world.

MAKING YOUR OWN “HALF N’ HALF” – TOP TIPS

When it comes to creating your own “Half n’ Half” – there really isn’t much to it – there are only two ingredients after all! The quality of the ingredients, however, will have a significant impact on the enjoyment of your drink.

For the first foray into making a “Half n’ Half”, we recommend a whisky that holds a sweetness. The Highlands’ Timorous Beastie is an ideal choice - thanks to its fruity and fudge-like character, this particular dram will offset nicely against the bitterness of a beer.

When selecting the right beer, keep these points in mind:

Avoid excessively bitter beers – these are likely to overpower your “Half n’ Half” in the same way that a cask-strength dram may be too strong – consider the flavour profile of the beer before combining the two. Hoppy beers may accentuate the whisky “burn”.

Opposites attract – despite the cautionary warning of an overpowering beer, don’t be afraid to experiment with different flavour profiles – it is all about striking the right balance. The complexity that a dram like the Timorous Beastie 18 Years Old will bring is likely to compliment a lighter beer. Just like creating a recipe, consider which tasting notes will merge well together and mix accordingly.

The “Half n’ Half” may be a popular drink, enjoyed by a wide audience, but getting the right combination of whisky and beer is very much dependent on personal taste. What is the perfect combination when it comes to pairing beer with whisky? That’s really up to you to decide.